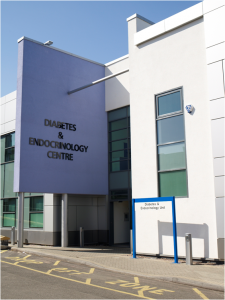 The diabetes and endocrinology centre at the Heartlands site was established in 1985 under the leadership of Professor Anthony Barnett and has since grown into one of the largest and renowned diabetes units in the United Kingdom providing a wide range of services to patients with diabetes. The Diabetes & Endocrine service at Birmingham Heartland Hospital moved into its purpose built facility in September 2009. The service offers a local and tertiary referral service and is closely affiliated with local universities.

Most of the diabetes services are multi-disciplinary and supported by well-trained medical, nursing staff, podiatry teams, dieticians and psychologist. In addition, some of the more specialised tertiary referral services are provided at the Heartlands site. All teams have nominated leads and work closely with other specialists such as Vascular surgeons, Ophthalmologists, Obstetricians, Paediatricians and Orthopaedic surgeons to provide excellent multi-disciplinary care across the three sites.

The Heart of England NHS Foundation Trust is one of the largest NHS trusts in England serving a multi ethnic population of over 1 million. Heart of England NHS Foundation Trust now incorporates Birmingham Heartlands Hospital, Solihull Hospital, Good Hope Hospital and Birmingham Chest Clinic, with well-established services across all the three major hospital sites. It is estimated that nearly 10% of the population served by the trust have diabetes with some ethnic groups such as the south Asian community  having much higher rates. In addition, there is a significant variation in the economic status within the population with some of the most deprived areas having a higher prevalence of diabetes and other chronic diseases.

We are using cookies to give you the best experience on our website. You can find out more about which cookies we are using or switch them off in settings.

This website uses cookies so that we can provide you with the best user experience possible. Cookie information is stored in your browser and performs functions such as recognising you when you return to our website and helping our team to understand which sections of the website you find most interesting and useful.

Strictly Necessary Cookie should be enabled at all times so that we can save your preferences for cookie settings.

If you disable this cookie, we will not be able to save your preferences. This means that every time you visit this website you will need to enable or disable cookies again.

This website uses Google Analytics to collect anonymous information such as the number of visitors to the site, and the most popular pages.

Please enable Strictly Necessary Cookies first so that we can save your preferences!